Anyone who rides a tandem bicycle knows it is unduly hard work. Why this should be is not entirely clear. Most people put it down to the sheer weight of the machine and, with even a good one weighing in around the 20kg mark, that seems likely. But there are two riders to power that 20 kilos. That’s a pretty decent racing bike for each of them. So why does it feel like each rider has a sack of potatoes on his back when you hit even the most moderate incline?

I’ve been piloting a very game and fit, sight-impaired lady, Sister Bríd Smith, for the last four years now and the real reason for the tandem’s short comings came to me in a light-bulb moment. We were slogging it out into a headwind somewhere around Roundwood a few years ago when huge low-loader articulated truck with a mechanical digger on the back lumbered past us. So much weight to move around. And, hey, look! So many wheels. So many axles. There was our problem. To move more weight, you need more axles. The motor tax offices of the world are well aware of this and tax commercial vehicles accordingly.

Now, the tandem bicycle doesn’t carry more weight than two bicycles. But it does have half as many axles! And therein lies the problem, the Achilles heel of these machines that are such a godsend to all who cannot cycle solo.

I have given considerable thought to the problem and considerable reign to my imagination and problem-solving abilities in trying to remedy it. All the solutions presented fairly major engineering and practicality obstacles. These are not just my findings but those of several much better brains than my own whom I had take a look at it and said ‘Nahh…’

Then, recently – another light-bulb moment. I was asked to test an electric bike……I am immediately aware that many, if not most of my readers who count themselves serious, dedicated or even just ‘honest’ cyclists will feel an immediate urge to discard this article as propaganda for the growing trend in these reprehensible machines….but please, bear with me. If you ride a tandem and you recognize the shortcomings above, you need to know what I have to say.

The electric bike I was asked to test (I’m a cyclist but also a cycle dealer so, hands up here, there were commercial interests in play) was not just any electric bike, but an electric racing bike. Now, really? I mean come ON! What possible application could it have. I train to get fit. I want a work out, not an armchair. I have no interest in scooting, power assisted, past my peers and friends on every climb. And the top speed allowed is ridiculously low. It’s nonsense.

But, long story short, I gave it a try. And the results amazed not just me, but all and every one of the many other cyclists in my very decent cycling group who tried this thing.

1: Wouldn’t the speed limiter be cutting the power just as a typical cycling group got going? 25kph is not nearly as fast as my training group’s average speed. So, abandoned by the electric assist, won’t I immediately fall behind, left alone with the very considerable weight of the battery and the motor to lug around, waiting for a decent climb to reassert my electric advantage and catch up? How much fun is that going to be? 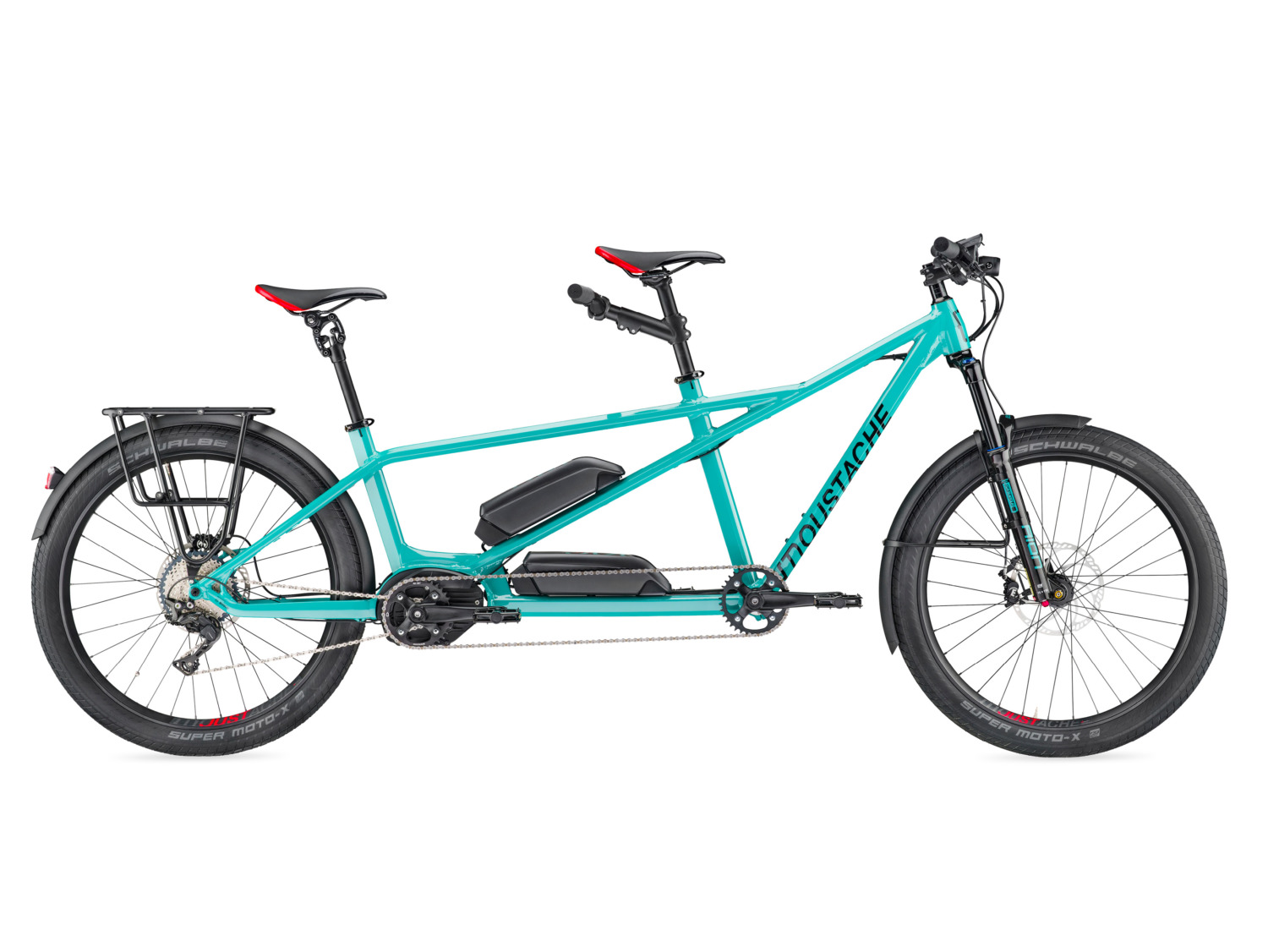 2: The average range of even a good electric bike is usually placed around 90 Km. But that’s an average range and it can be decimated by heavy handed use of the ‘throttle’. So, given that I’m likely to be well behind by the time we find a hill, I’ll probably need all the boost I can get to make up the ground lost on the flat. Range will probably be a problem too.

3: The real problem. Even if problems 1 and 2 can be overcome, how much training am I actually going to get riding around on what might as well be a motorbike?

So I took the electric racer out with my mates. Here’s what I found.

The upshot of all this? My second light-bulb moment. Wouldn’t this gentle electric assist solve just about all the problems of our unwieldy tandem, lift the two sacks of potatoes off our backs, get us moving off at the lights and up the hills – and little or no more than that as we wished? I couldn’t wait to run it past The Flying Nun (Sister Bríd)!

Nothing’s easy though and Sister Bríd’s reaction was much as I’m certain many of my readers’ here would have been. No way. She wasn’t one bit interested in any electric gismo. She wanted her work-out. She wanted to be tested. She wanted to (and I quote)‘build her muscles’. Forget about it! And she did.

I tracked down the only company in Europe that I could find building and electric tandem. ’MOUSTACHE’ are a relatively new French company, a splinter from the more famous LAPIERRE brand, but they have already built a considerable reputation as a specialist electric-only manufacturer and their electric off-road and downhill machines are held in particularly high regard. Appropriately, the word ‘moustache’ in French denotes not just facial hair but a smile. The company motto, also appropriate, is ‘Bikes That Make You Smile’. They offer two electric tandems, one for off-road, one for touring. I ordered the tourer. I’d have to wait a few months, even for a cancellation, so full were their order books.

It arrived last week, three days before the Wicklow 100/200, an event in which myself and The Flying Nun were scheduled to participate. I hurriedly got it built in time for our last training spin the next day, the Friday before the event. There had been no further discussion of it with my stoker.

Now, Sister Bríd is legally blind but she still has some peripheral vision, she’s as sharp as a tack and not much gets past her. She is also a vastly experienced and seasoned tandem stoker. So the little ruse I decided to spring on her at the last minute was unlikely to endure too long – but I got her aboard the new bike without too many questions. I think she was so overcome at the idea of a new bike she was maybe a little off balance. But I couldn’t have imagined it would endure the 40 kilometers we’d cover before our coffee stop without so much as an enquiry from the back seat.

When we got off the bike the smile on the good Sister’s face was as wide as the handlebars on the bike (they are ridiculously wide mountain bike bars – I’ve since trimmed them down and put ergonomic grips-and-bar-ends on both sets) I was pretty pleased myself, so smooth and unencumbered had been our progress over the 40 kilometres we’d just covered which averaged 100metres of climbing each. I asked her “Well? Have you worked it out yet?”

“Worked out what?” She was genuinely puzzled.

“Worked out why this bike is ‘lovely’ as you clearly think it is.” I replied

I had no need to push my subterfuge any further. When I told her she had been riding an electric bike for the past two hours she was astonished. Speechless. And that doesn’t happen too often. Not only that, but the highly sceptical and prejudiced Sister Bríd was instantly and completely won over. She just couldn’t believe it. And she absolutely loved it.

The point is this. What’s really impressive about a good electric bike, from a cyclist’s point of view, is not how much assistance it offers but how much of a work-out it leaves for the rider to enjoy. Sister Bríd is as true a die-hard cyclist as you’ll meet but she describes the electric tandem as ‘life-changing’. And I agree. At the very least it’s a total game-changer. And I’m certain of one thing. Anybody who rides a tandem regularly who test-rides this machine will want one.

Two days later we took ‘The Machine’ (as the good Sister has christened it) out on the Wicklow 100. We’ve completed it three times previously, each time having to endure gut-busting, eye-popping slogs up the steeper climbs and ending the day completely wrung out. We never took the throttle out of the lowest setting. Even on the steepest climbs (up to 17% grades) it was all we needed unless we wanted to charge up the the hills at unrealistic speeds.

Some stats. The average age of the tandems crew was over 70yrs. We averaged 24kph for the 102 kilometers we covered. The battery indicator was still showing 3 out of 5 bars charge remaining. And both pilot and stoker were, well, not quite as fresh as a daisy (my legs were singing a small country song) but we were far from ‘wrung out’ and happy to add a few miles to our homeward trek, visiting friends to show off our new steed.

So, finally, a tandem that works! I will no longer experience that vague feeling of dread that precedes our weekly training spin. We will travel further, to new venues. We’ve always sought out the hills and will continue to do so. The difference is now we can enjoy them. Okay, if suffering is your thing, then this is not for you. But me? I’m certain that the tandem bicycle puts its riders at an immediate (and now unnecessary) disadvantage which makes tandem cycling a far less pleasant and fulfilling experience than regular cycling. ‘The Machine’ simply levels the playing field. Let the fun commence!

For further information, and to organize a test ride on ‘The Machine’, visit thebikerack.ie and speak to John.